Nandyal, originally known as Nandalluru, derived its name from Nandi (bull), the vehicle of Lord Shiva. It is surrounded by nine temples of Lord Shiva (called Nava Nandi) hence the name Nandyala. It is a holy town situated in Kurnool District of Andhra Pradesh in India. It falls in Rayalaseema region. It is located 69 km towards East from Kurnool District and 247 km from Hyderabad towards North. It is famous amongst locals for trade, commerce, education and industries in the region. It has several holy places of worship, which makes it a famous tourist destination among tourists.

Located in the southern part of Andhra Pradesh, the longitude and latitude of the place stands at 78.48oE and 15.48oN respectively and has an average elevation of 203 meters (666 feet). It is surrounded by beautiful hills that border the town on all sides with Kundu River flowing to its west. The region is densely forested due to the Nallamala Hills in the east. It owns many tanks and reservoirs making it rich in water resources, which is the main reason of an equitable climate throughout the year in Nandyal. The average temperature of the place stands at 28o C but summers are usually hot.

Nandyal - Past and Present

Nandyal is blessed with centuries of rich history. It has two stories associated with the name of the place; first one being surrounded by nine temples of Nandi and hence called Nandyal, while other one is of the time before Britishers ruled India it was known as Nandi Hela (a large festival for the holy Nandi, which is held in Nandyal). Nandyal was ruled by Sri Krishna Devaraya, Nandana Chakravarthi and Britishers.

Present day Nandyal is a result of British rule, during that period many Buildings were constructed. Nandyal became a municipality in 1900. Introduction of railway in 1890 led to the rapid development of the town by making it easily accessible for trade and commerce.  Some of the most famous National leaders like Mahatma Gandhi, Jawahar Lal Nehru, Indira Gandhi and Rajiv Gandhi visited Nandyal. At the time of freedom struggle many meetings and conferences took place in Nandyal. 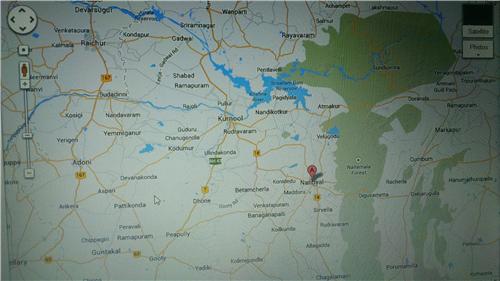 Culture and People of Nandyal

An estimated population as per the 2011 census of Nandyal is 211,787 people living in 45,189 Houses, Spread across total 39 villages and 24 panchayats. Males are 108,348 and Females are 105,827. 157,120 persons live in town and 57,055 live in rural area. The population here speaks mainly Telagu, though Urdu is also widely spoken. Nandyal has an average literacy rate of 63%, higher than the national average of 59.5%. Male literacy is 72%, while female literacy is 55%. In Nandyal, 13% of the population is under 6 years of age. Most of the population of Nandyal is Hindu. The local cuisine of the city is spicy south Indian food like Dosa, Vada, Idly, Sambhar, Rasam and Pongal.

Nandyal is a traditional city which is very famous amongst the devotees of lord Shiva all around the world. Nandyal has many important temples like Shivanandi Temple, Omkaram Temple, Mahanandi Temple and many more.


Economy and Agriculture of Nandyal

Nandyal serves as a major hub for industry and agriculture. Its richness in natural resources like marble and granite make it a perfect export oriented destination. Sugar, Ethanol, Cotton, Mangoes,Cement, PVC pipes, Rice and Oil are the main products for export. The seed industry of Nandyal is flourishing from past 30 years. The town has many colleges to foster the growth of education. Some of these colleges are RGM Engineering College, Kesava Reddy Group of Institution and Dental and Medical Colleges.

Nandyal is very famous for its lentil crops. The major crops of Nandyal are Tobacco, Cotton, Paddy and Jowar. Apart from these Sunflower, Toor dal, Mustard seeds, Bengal gram, Sugar Cane and Groundnuts are also grown here. Indian Broad Beans, Tomatoes, Ridge Gourd, Cluster Beans, Chillies, Cucumber,  All types of leafy vegetables and the most famous Polur Brinjals are also grown here. Reason for such a vast cultivation lies in its soil, which is of mixed variety making it suitable to grow different crops. Other grown items include Bananas, Castor Seeds and the world famous Mangoes. Nandyal also acts as a commercial hub for neighboring villages. 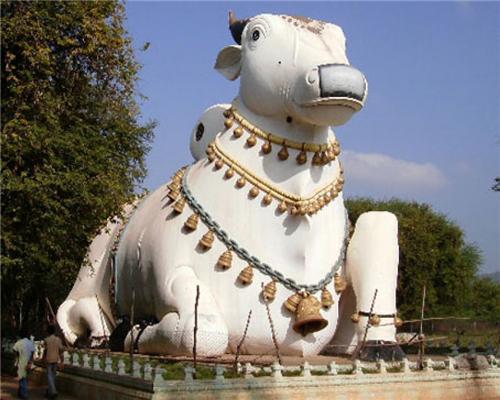 Nandyal lures huge number of tourists every year due to its religious significance and rich water resources. Most famous tourist attractions of the town are the nine temples of Lord Shiva called Nava Nandi (including Garudanandi, Suryanandi, Krishnanandi, Mahanandi, Vinayakanandi, Shivanandi,  Prathamanandi, Naganandi and Somanandi). Apart from these Omkaram Temple, Sri Yaganti Uma Maheswara Temple, Belum Caves, Srisailam, Nallamala Hills and Ahobilam are also famous destinations amongst tourists from all around the world. It also has a beautiful cathedral constructed and dedicated in the year 1905.

Nandyal has a good mix of traditional markets to modern shopping malls and online shopping. As a religious place, Nandyal has good number of shops selling religious goods. Idols of Lord Shiva and Nandi, Audio CD of Mantras and Shlokas, different types of incense sticks and holy books are all available in the shops of Nandyal. Handicrafts and antiques and literature books are some of the common buys of tourists in Nandyal. The city has a booming economy and that reflects well in the shopping style of the Nandyal people. They prefer to avoid traffic lines and shop online for all of their needs now a day.

The city is well connected both by roads and railways to almost all the major cities in India including Karnataka, Tamil Nadu, Bangalore, and Chennai. There are frequent buses from Nandyal to Hyderabad, Kurnool, Tirumala - Tirupati, Vijayawada, Anantapur Hindupuram, Chittor and Kadapa. Buses also go to parts of Karnataka and Tamil Nadu such as Nellore, Bengaluru, Bellary and Chennai. It is a major station on the Guntur division and has direct trains to Secunderabad, Bangalore and Howrah. The nearby airport is the Rajiv Gandhi International Airport in Hyderabad, which is around 270 km away from Nandyal town. As far as the local transport is concerned, Auto rickshaws and Taxis are the common means of transportation here.


Facts and Figures of Nandyal