Surrounded by Nallamala Ranges, which is probably the largest stretch of undisturbed forest in South India apart from the Western Ghats, in the east and Kundu River flowing to its west, Nandyal is located at 78.480 E and 15.480 N on the southern part of India. It has an average elevation of 203 meters (666 feet).  The region is densely forested and rich in water resources owning many tanks and reservoirs. Forest to the south of Nandyal has been mined for granite. Its richness in water resources leads to an equitable climate throughout the year. 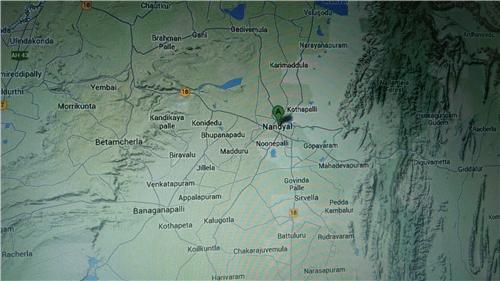 Nandyal is situated in Kurnool District of Andhra Pradesh, which is surrounded by districts of both Andhra Pradesh and Karnataka. It is bordered by the state of Mahabub Nagar in its north, Anantapur in its south, Praksam in its East and Bellary, a district in Karnataka in its west.

Distance Chart from Nandyal to nearby localities and other important cities

Nandyal is known to have tropical weather with three main seasons– summer, winter and the monsoon. The annual average temperature stands at 28.40 C and annual rainfall stands at 710 mm in the region. The summers are extremely hot and unpleasant. The traveler should avoid visiting Nandyal during the summer. One can visit during winters which are relatively cooler. Anyone travelling during the monsoon season can expect heavy rainfall. Nandyal experiences more rainfall than other parts of Andhra Pradesh.

Summer in Nandyal is quiet hot as heat waves are pretty common. The summer months are from March to May and sometimes extend till June. The temperature ranges from a minimum of 30o C to maximum of 4oC. Humidity is very high and can go up to 75%. The warmest month of the year is May with an average temperature of 33.8o C. People who are traveling form places with milder temperature are advised to avoid the summer months.

Monsoon in Nandyal starts from July and goes on till September. During these months heavy rains can be expected as Nandyal gets more rain than the other parts of the state. The driest month is January with 0 mm rainfall and the most precipitation falls in July, with an average of 147 mm. If travelers are planning to visit in this season, they should be well prepared for the rain.

This is definitely the best time of the year to visit Nandyal as temperature is moderate after the end of the monsoon season. The months from December to February constitute the winter season. The temperature varies between a minimum of 20o C to a maximum of 30o C. The coldest month of the year is December with an average temperature of 23.6o C.

The best time to visit Nandyal is from October to March when the temperature is moderate and the climate is pleasant. This is the perfect time to travel and experience the beauty of Nandyal.