Mahanandi is a beautiful temple situated at the foothills of Nallamala forest range at a distance of 14 km from Nandyal and 80 km from Kurnool, Andhra Pradesh. The temple is surrounded by lush forest, fresh water pools and gentle streams and is one of the most famous pilgrimage sites of South India. 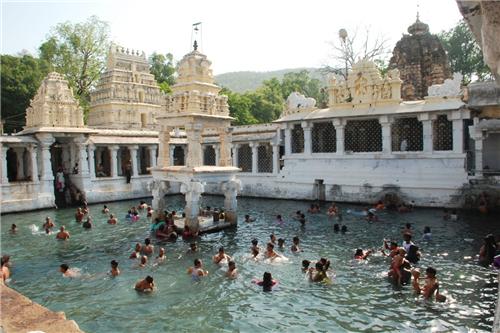 As per the legend, Nanda one of the Kings of Nandyal, once wished to perform Abhisekam to Lord Siva, with milk. He ordered for the supply of milk for Pooja. One of the cowherds of Gopavaram village, who was the in charge of this duty suddenly noticed that one of the cow was coming empty every day. To find out the reason behind this, he followed the cow one day to the forest and hid himself behind the bush. To his surprise, the cow reached the ant-hill, grazed around for some time and began to empty its milk. A young boy was having the milk.

The cowherd then conveyed this news to the King. As expected the King was surprised and decided to experience it himself. The next day, he did the same thing and again the cow began to give her milk on the ant-hill. The young lad began to drink the milk again, but God vanished immediately once the king started to enjoy the sight  and the cow in a hurry destroyed the ant-hill. The hoops of the cow are still deeply marked on the ant hill.

One day, Lord Siva appeared in the dream of the King and told him to worship him at that place. So, the King constructed a temple which is known as Mahanandi Temple.

This ancient temple dates back over 1,500 years. The inscriptions of 10th century peoples speak of the temple being repaired and restored many times.

Mahanandi Temple has a marvelous architecture and is marked by a huge Nandi at the entrance and therefore it’s known as Mahanandi Tirtha. The sight of Nandi can be seen from the village itself. As you pass the Nandi at the entrance, you will find two perennial pools with crystal clear water in them.
By walking a little further, one will see the second prakara (temple compound) and then a large Pushkarani or Kalyani (Holy water tank) that is spreads over 60sq feet with a Mantapam (Pavilion like structure) in the centre.

There is a small Shiva Linga in this mantapam. Mahanandi temple is known for its curative powers found within the heat lukewarm drinking water found within the tank. . The inlets and outlets of the tank are organized in a way that the depth of the water remains constant at 5 feet for the devotees to swim in. Supply of this water here has never been stopped water is alleged to return from five springs known as Daivodhinidhara, Srisailadhara, Kailasatirtha , Narasimhadhara and Nanditirtha.

Mahanandi is most famous for the day long celebrations that are held during Maha-Shivaratri. The annual festival held during the months of February and March attracts hundreds of thousands of pilgrims and tourists from around the world every year. The standard belief is that the worship of all Nava Nandis should be finished within a day before sunset. The other festivals like Dasara, and Ugadi are also celebrated in Mahanandi Temple.

By Rail: The nearest railway station is at Nandyal at a distance of 16-km from Mahanandi.

By Road: Mahanandi is about 16-km from Nandyal and100-km east of Kurnool by road. Bus services are available from Kurnool and Nandyal.

By Air: The nearest airport is GMR Indira Gandhi Hyderabad International Airport at a distance of 215 km.

Some of the places around Mahandi temple are:

During your visit to Mahanandi temple, you can stay at Devastana Choultries or Shambhu Priya Tourist Guesthouse. Accommodation is also available in the hotels at Kurnool.