Nandyal as a Religious City

Nandyal was a part of the ancient Vijayanagara Empire and has a rich history and culture. Nandyal is surrounded by water on four sides and besides being a highly fertile place it is a pilgrimage center. The Sanskrit word “Nandi Aalaya” means temple of the bull. Emperor Sri Krishna Devaraya constructed nine temples for the bulls and the traditional belief is that this place was ruled by these nine bulls. Nandyal is in the western part of Andhra Pradesh. The thick Nallamala forests are in this region. Among the nine Nandi temples the Mahanandi temple is dedicated to Lord Shiva and the other eight temples are within a radius of 15km from the Mahanandi temple. The Nallamala Hills as a whole is considered as “Adisesha”, the divine serpent, with his head at Tirumala, middle at Ahobilam and tail at Sri Sailam. 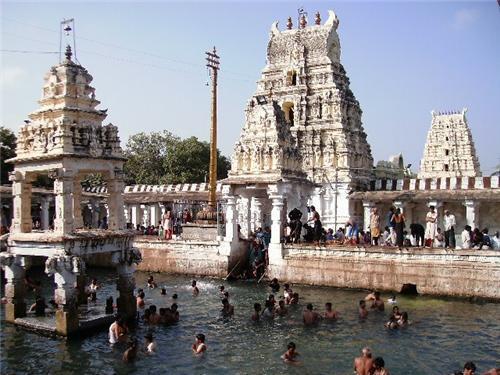 Ahobilam in Nandyal is a very famous Vaishnavite temple. It is believed that Lord Vishnu took the incarnation of “Narasimha” – manifestation of half-lion and half-man at this place. Those who visit this place can view the”Ugra Sthambha” – the pillar from which Lord Vishnu appeared as “Narasimha”, killed Hiranyakashipa and saved Prahlada. There are two shrines here – the Upper Ahobila and the Lower Ahobila. It is believed that Lord Srinivasa installed the deity in these temples before his wedding seeking the blessings of Lord Narasimha. The deity of Upper Ahobilam is believed as in fierce form whereas the deity in Lower Ahobilam is believed as in peaceful form. The ancient poet Saint Annamacharya is believed to have stayed in this place for some time composing songs in praise of the Lord. It is also believed that another great sage Lord Pothuluri Veerabrahmendra Swamy stayed here for some time, meditated and attained the power of ”Kaalagnana” – knowledge about the future. 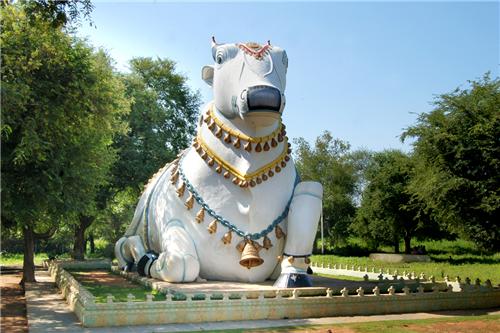 The story behind Akshaya Theertha

According to the legend, after killing Hiranyakashipa and blessing Prahlada, Lord Narasimha was roaming around the hills of Ahobilam and settled at nine places to bless the devotees. The nine temples are believed to have come up at these nine places. It is believed that Lord Parasurama worshipped at the Bhargava Narasimha temple, one of the nine temples. Devotees believe that those who take bath in the “Akshaya Theertha” and worship at this temple will be blessed with prosperity. The Yogananda Narasimha is believed as the compassionate form of the Lord. Devotees worship the Lord to come out of all difficulties. The students of fine arts seek the blessings of Chatravata Narasimha. It is believed that one of the nine astrological planets, Ketu has worshipped this Lord and attained all comforts. The temple of Ugra Narasimha at Upper Ahobilam is the main temple. It is believed that Goddess Chenchu Lakshmi who is also with this Lord was a local tribal woman who was an ardent devotee of the Lord for a long time. It is believed that those who worship the Lord are able to come out of fear.

The Varaha Narasimha ensures success to those who worship and Malola Narasimha brings unlimited joy. Jwala Narasimha is the fierce form of the Lord and those who worship him can attain success in their efforts. Those who light ghee lamp here in the month of Kartigai and worship he Lord can be freed from sins and get name and fame. There is a red water pond on way to this temple. It is believed that after killing Hiranayakashipa, the Lord washed his hands in this pond. The Paavana Narasimha is the most peaceful of the Lord among all the nine forms. The belief is that here the Lord liberates the devotees from their sins of past lives as well as current life. Those who worship the Lord Karanja Narasimha with three austerities – thought, word and action can attain enlightenment.