Nandyal is full of tourist attractions of all kinds. You can easily find wildlife sanctuaries, waterfalls, forest ranges and natural attractions apart from the world famous temples here. Nandyal is surrounded by many tourist places on all sides, which are located at a mere distance from city and are must visits. Let us take a look at such places: 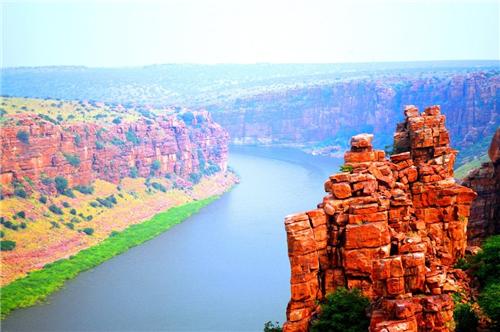 Gandikota Fort, situated in Kadapa district of the Indian State Andhra Pradesh is the place where you will find endless grasslands, high rock formations and the birds flying above the pale green water of Penna river, which sleeps silently in the valley. Gandikota originated its name from the ‘gorge’ (in telugu ‘Gandi’) formed between the Erramala ranges and the river Pennar. The fort is spread across a huge area and comprises of Ranganathaswamy temple, Madhavaraya temple, The granary, a royal pond, Jamis Masjid (mosque) and a clock tower within the walls of the fort.


How to Reach Gandikota Fort

Gandikota fort is situated at a distance of 15kms from Jammalamadugu and 100 Km from Nandyal.

By Train: Nearest railway station is Muddanur, which is located at a distance of 30 km from Gandikota.

By Air: Bangalore is the nearest airport, which is located at a distance of around 280 Km from Gandikota. 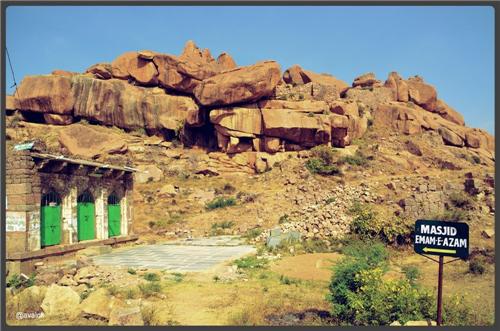 Standing gracefully atop of black granite rocks,  Adoni Fort was found approximately 300 years ago. It is one of the interesting features of Kurnool District. The fort was built between 14th to 16th centuries by the rulers of Vijayanagar Dynasty. Numerous Persian and Arabic inscriptions suggest that the fort  served as military base for Islamic Rulers like Adil Shahi of Bijapur and Golconda Dynasty.


How to Reach Adoni Fort:

Adoni fort is located at a distance of around 100 Km from Kurnool and 165 Km from Nandyal.

By Airport: Hubli Airport is the nearest airport, which is located at around 285 Km.

There are many hotels, including Adonis Palace Hotel, Hotel Adonis Plaza and Hotel Adonis, situated near the fort as the fort is not far from the city.

The town of Mantralayam is located on the banks of Tungabhadra River in Kurnool District. The place attracts huge population of devotees of Lord Vishnu and is known for the Samadhi of Saint Raghavendra Teertha Swamy, who is believed to be the incarnation of Bhakta Prahlad, an ardent devotee of Lord Vishnu. It is believed that he performed numerous miracles during his lifetime. It is believed that Guru Raghavendra Swami is in the Vrindavana from the past 339 years and is believed to be in the Vrindavana for another 361 years. A lot of people from Hyderabad and Bangalore visit the place to get peace of mind here.


How to Reach Mantralayam

Mantralayam is located at a distance of around 75 Km from Kurnool and 156 Km from Nandyal.

By Airport: Hyderabad International Airport is the nearest airport, which is located at a distance of
around 240 Km.

There are many hotels situated near Mantralayam and many guest houses managed by Sri Raghavendra
Swamy Mutt in the Mantralayam itself for the convenience of devotees. 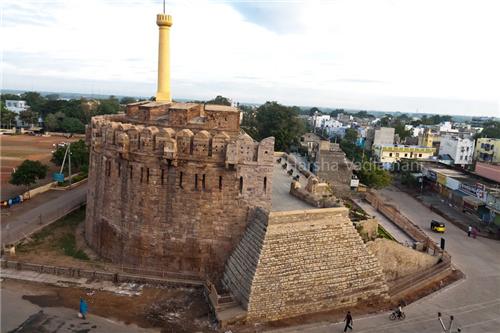 
How to Reach Kurnool Fort

Kurnool fort is located in the city of Kurnool itself at a distance of around 75 Km from Nandyal.

There are many hotels situated near the fort as the fort is located within the city itself. 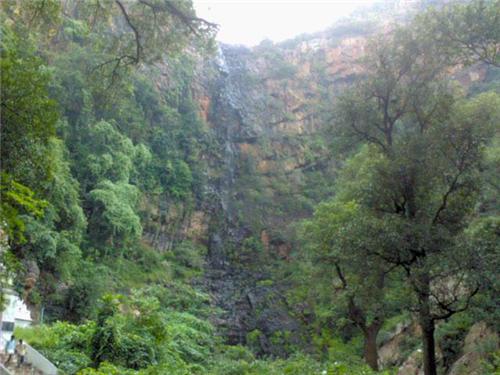 Spread across an area of 464.42 Sq. Kms, Lankamalla Sanctuary is located at a mere distance of 15 Km form Kadapa and 130 Km from Nandyal in the Indian State of Andhra Pradesh.  It is famous for being one of the last homes of the critically endangered Jerdon’s Courser. The sanctuary has dry deciduous thorn forests with steep slopes and very deep gorges. Red Sanders, an endemic species is found here. Faunal population of the sanctuary include the Jerdon’s Courser Chinkara, Nilgai, Wild Boar, Fox, include Cheetal, Panther, Sambar Sloth Bear, and Chowsingha. Forest Rest House at Siddavotam and Kadapa are good accommodation options. Best time to visit the sanctuary is from October to February.


How to Reach Lankamalla Sanctuary

One can accommodate at forest rest house at Siddavotam and Kadapa. 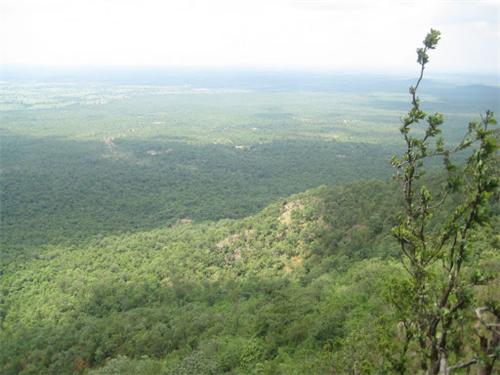 Nandyal is surrounded by Nallamalla forest, which is a very dense area and is famous for its tiger inhabitants. Nallamalla Forest, also known as Nallamall ranges, is one of the largest undisturbed stretches of forest in South India, located in Nallamalla Hills, which is is a part of Eastern Ghats. It spreads over the districts of Guntur, Kadapa, Kurnool, Prakasam and Mahabubnagar. The forest is very famous for its tiger population and a part of the forest belongs to the Nagarjunsagar- Srisailam Tiger Reserve.  Most of the area of the ranges is still unexplored giving a rise to the tribal population. The place derived its name from "Nalla - malai” known as good hills in Tamil language. The place run in a nearly north-south alignment, parallel to the Coromandel Coast for close to 430 km between the rivers, Krishna and Pennar. In its south are located, Tirupati hills, which is the merging point for the Nallamalla forest and flat Palnadu basin is situated in the north of the hills. The rocks of the Nallamala ranges are Quartzite covered with an irregular salty formation and are amongst the oldest rocks in the world. Best way to visit the place is through Railway.


How to Reach Nallamalla Forest

Nallamalla Forest is located at a distance of 189 Km from Nandyal. Best way to visit the place is through the Vijayawada - Guntakal line of the South Central Railway that pass through the hills. The entry point to the hill is located at the Nandikama Pass, famous tourist attraction Cumbum Lake. A state highway is also located here, which follows a zigzag alignment to avoid any tunnels in the way. People, especially youngsters usually prefer to drive in the area due to its scenic beauty and abundance of tourist attractions. Nearest Airport is Hyderabad International Airport, which is located at around 212 Km.