Sri Yaganti Uma Maheswara Temple, also known as Yaganti is a very famous temple of Lord Shiva, Parvati and Nandi (bull) and is located in the Kurnool District in Andhra Pradesh, India. It is situated around 48 km from Nandyal and 100 km from the city of Kurnool. The temple was built by the first Vijayanagara Sangama King Harihara Bukka Rayalu in the 15th century. It was constructed according to Vaishnavaite tradition.


Legend Behind the Yaganti Temple

There are many legends about the temple but the most famous one is of Sage Agasthya. When he completed his Uttara Desha Yatra he came towards the South and reached this site. Impressed by the beauty and serenity of the location, he decided to install an idol of Lord Venkateswara. After the idol was completed, preparations were being made to install it, then he found that the big toe of the idol was broken. He was extremely disheartened from this instance and prayed to Lord Shiva seeking the reason. Lord Shiva appeared to him as a tiger and told him that this place resembles Kailash and hence more suited to be an abode of Lord Shiva. 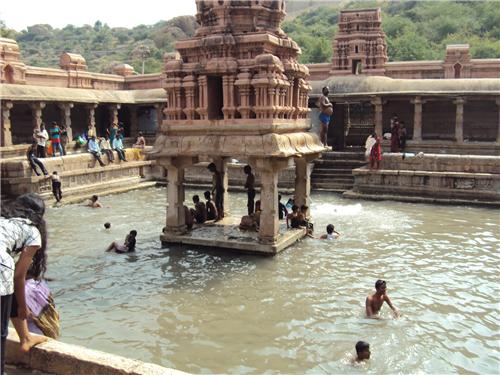 The unique feature of the temple is the Pushkarin pond within the premises of the temple. The water flows into the pond from the mouth of Nandi (Bull)and comes from the surrounding hills. The pond is filled with water throughout the year, while the source of its way is unknown till date.

There are three cave temples in Yaganti adjacent to the main temple.

Agastya Cave is believed to be the place where saint Agastya performed penance and Lord Shiva appeared before him.

Venkateswara Cave houses the idol of Venkateswara Swamy that was created by Sage Agasthya but could not be installed because of a broken big toe. It is believed that the Venkateshwara idol existed much before Tirupati.

Veera Brahmam Cave is the place where the eminent saint Potuluri Veera Brahmam wrote some portions of his great work – the Kala Gnanam.

All of these caves are open for worship throughout the day. Artificial lights are provided as there is hardly any natural light available inside. The height of the cave is really low and one has to stoop down in order to enter it. 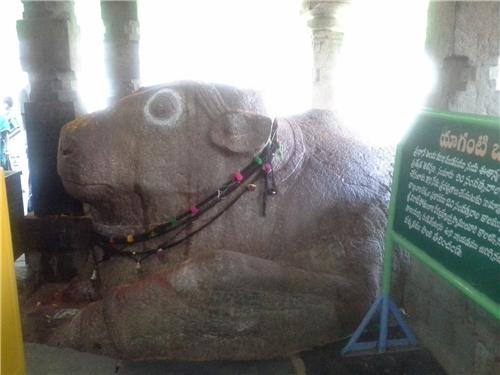 There is also a Nandi idol facing Shiva, which has been growing in its size over the years. All the devotees think it to be a miracle, while science explains this as a geological phenomena and it has been confirmed by the Archeological Survey of India.


Hotels and Restaurants around Yaganti

Facilities to stay in Yagati are very limited. Banaganapalle, the nearest town 17 kms away from Yaganti has some  basic places to stay.

By Rail: Nearest rail-head  is Panyam; there are regular trains from Secunderabad.

By Air: Nearest airport is Hyderabad; you can take a bus or train from here
Bus facility is available from Banganapalli to Yaganti twice every day at 7:00 am and 3:30 pm.